To expand the scientific and technical range, the Chair of Energy Economics organised a tour of the Philippsburg nuclear power plant on 8 June 2018 for students of the UDE. A total of 31 students from different study programmes and semesters as well as research assistants took part in the event.

The first unit (PPP 1), a boiling water reactor, was finally shut down in the course of the moratorium on phasing out nuclear power after 32 years of operation in 2011. At present, only the second block (PPP 2) is in operation, which must be shut down by the end of 2019 for the same reason. 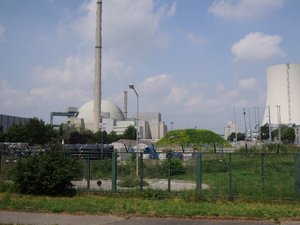 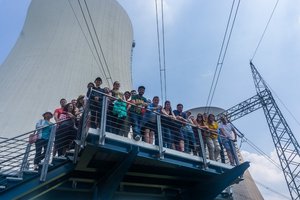 With a net electrical capacity of 1402 MW, the pressurized water reactor in block 2 contains 193 fuel elements (equivalent to around 103 tons of uranium). Under full load, up to 140,500 m³ of water flows into the cooling tower per hour. In 2016, the plant generated over 10 billion kilowatt hours of electricity, which covers more than half of the electricity demand of all private households and about one-sixth of the total electricity consumption in Baden-Württemberg.

After a warm welcome at the entrance on the factory area, the participants listened at first to a detailed explanation about the functionality and technical data of the two blocks and the associated energy policy. Because the revision process was not yet completed, most of the buildings are not allowed to enter on that day. However, a video camera provided the participants a remarkable insight into the reactor building and the giant turbine house. Under the excellent weather condition, participants were able to go across the factory, from the factory’s gateway via the cooling towers and up to the entrance of the machine cabin in front of the reactor building. Behind the connected transmission grid, one could also see the warehouse of nuclear fuel in the distance.

Regarding the upcoming decommission, many related issues are discussed in details after the welcome speech, including the secure provision of electricity, and the climate protection etc. As explained by the visiting guide, the EnKK applied for early approval for the decommissioning and dismantling of block 2 in July 2016, so that the dismantling could begin as soon as possible at the end of production.

All participants evaluated the excursion as very instructive.